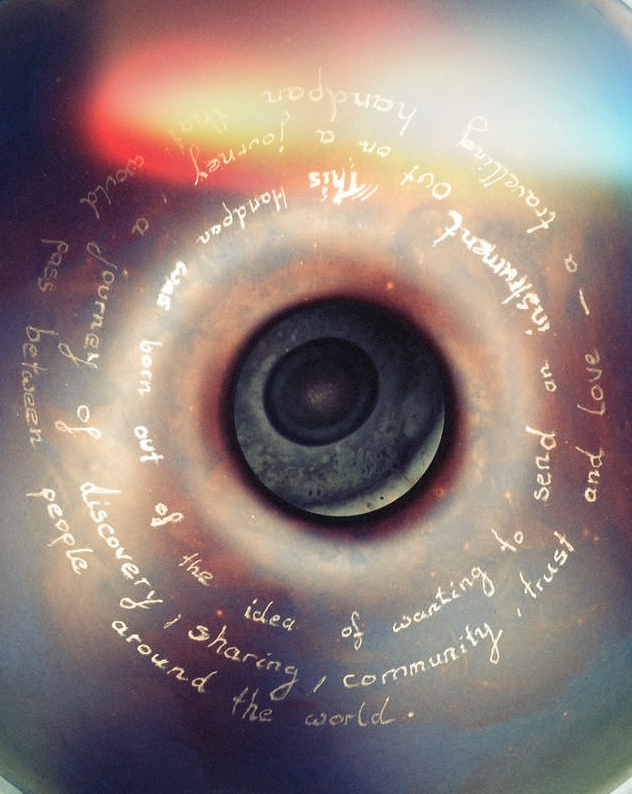 A JOURNEY OF TRUST,

The travelling handpan is the lovechild of two brothers in hammers: Karumi Steel and Soulshine Sounds. While spending time together they were inspired to see the world from the eyes of a sound sculpture that is travelling through the world, touching listeners all over the world and forming connections between people that transcend the ordinary.

Kelly Hutchinson, one of the organisers of the HangOut Uk, introduced the project to the community with the following words:

“The Travelling Handpan is an idea that was born out of wanting to send an instrument out on a journey, a journey of discovery, connection, sharing, community, trust and love- a travelling handpan that would pass between people around the world.”

The words were then engraved on the bottom of the instrument and its journey began at the 10th anniversary meeting of HangOut UK. A raffle draw decided with whom the travelling handpan began its journey.

Marc Constantine first won guardianship of the instrument and played the first notes on the travelling handpan live on stage at HangOut. Each guardian may keep the instrument for a week, maybe 2…. longer if they wish, but no longer than 4 weeks.

Since september 2016 a travel log is unfolding, new people, new countries, new cultures, new discussion, new friendships; a handpan travelling to all sides of the world.

To follow the Travelling Handpan and maybe become part of its history please visit the facebook page.